Seeing the City in a New Light

URA’s Chief Urban Designer Mdm Fun Siew Leng recaps her journey on how meticulous planning and urban design has breathed life into the city, and contributed to Singapore being named the most beautiful city in Asia.

I watched Crazy Rich Asians on DVD after catching the parade. It seemed appropriate because our skyline was featured so many times.

Twenty years ago, when I joined the URA, many perceived our city as unexciting. Last year, Singapore was named the most beautiful city in Asia. Looking back on our planning and urban design efforts, we have come a long way.

One of the most memorable images of our skyline is the one beamed to the world during the Singapore Grand Prix.

Indeed, our skyline is a heady combination of contemporary skyscrapers and low-rise heritage buildings. Conservation of our built heritage gives us a sense of emotional security and rootedness, and is an integral part of urban design.

Given that Singapore is land-scarce, new buildings are mostly high-rises with large footprints to meet contemporary business office needs. By conserving historic districts like Chinatown, Little India, Kampong Glam and Boat Quay, we provide relief from an otherwise dense environment. With these fine-grained street blocks, our city has more diverse granularity. In the Singapore River precinct, rows of restored shophouses along the Boat Quay waterfront, juxtaposed against the skyscrapers of our Central Business District, give our city its own distinctive identity.

Conscious decisions were made to punctuate the city with open spaces and waterbodies. Our historic Singapore River, including its stone steps, was cleaned to bring new life to the city. While our Civic District is marked by the Padang, Marina Bay is graced by the 54-hectare Gardens by the Bay. When we reclaimed land to form Marina Bay, a 48-hectare waterbody was created as a new focal point for the city.

The skyline of Marina Bay is a harmonious composition of low-rise buildings at the waterfront and skyscrapers in the background. This allows us incredible views to and of individual buildings. It also creates a dynamic ‘stepped-up’ skyline profile that many have come to love and admire.

In 2009, URA launched its Night Lighting Master Plan to achieve a three-dimensional nightscape for the Downtown area. Collectively, the buildings present an attractive, coherent, and elegant skyline, with national monuments lit in warm tones and new buildings in contrasting cooler tones which highlight their special features. For special occasions, these buildings burst forth with coloured lights, orchestrated as a  celebratory backdrop to the festivities.

Rows of restored shophouses along the Boat Quay waterfront, juxtaposed against the skyscrapers of our Central Business District, give our city its own distinctive identity.

One of the most photographed buildings in the city is the Park Royal Collection Pickering Hotel, striking for its unique design of imbuing the architecture with greenery at every level. 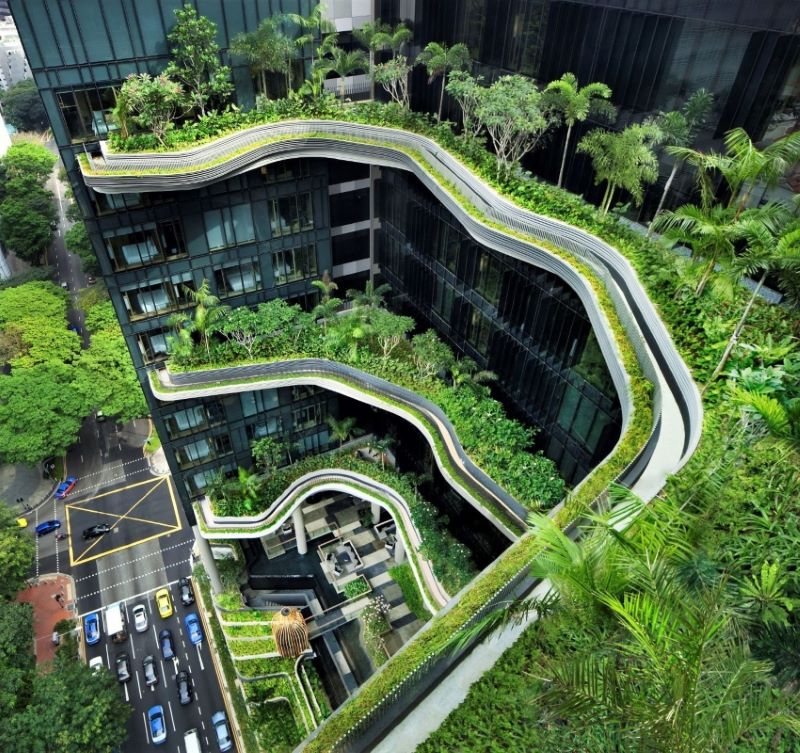 Such buildings are a response to URA’s push to incorporate greenery in our buildings.

Over the years, the URA has rolled out incentives and guidelines to promote skyrise greenery and vertical greenery through schemes such as the Landscaping for Urban Spaces and High-Rises programme, more commonly known as LUSH. Its premise is simple: replace the greenery which has been displaced on the ground when development takes place. Since the introduction of the policy in 2009, LUSH has seen 176 hectares of greenery added to our developments, equivalent to 328 football fields.

Oasia Hotel Downtown, with its red mesh façade planted with 21 species of creepers, leads the pack. Even the Pinnacle@Duxton, the nation’s first 50-storey public housing development, features skyrise gardens at the 26th storey and rooftop. More recent buildings outside the city centre, such as Kampung Admiralty and Oasis Terraces, provide community gardens for residents to practise urban farming.

These buildings have become a new typology and architectural identity crafted in our climatic, cultural and social contexts.

In Singapore, one of our key planning principles is to ensure that all waterfronts must not be privatised but be accessible to the public.

At the heart of our physical environment are meaningful places which allow us to connect as we go about our daily lives. Over the last two decades, we have created new public spaces and enhanced many more.

Did you know that the Marina Barrage, a popular spot for kite-flying and picnicking, did not even start out as a public space project? 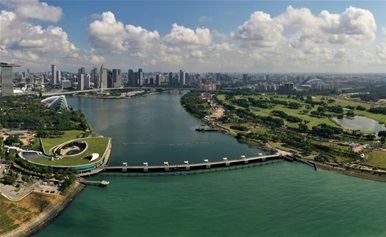 In Singapore, one of our key planning principles is to ensure that all waterfronts must not be privatised but be accessible to the public.

We were therefore conscious that Marina Bay must be inclusive. There was a nagging fear that in being positioned as the business and financial hub, Marina Bay would only serve people who worked in gleaming office towers. Hence, many areas at the street level were designed as publicly-accessible parks, promenades and plazas. Knowing that water has universal appeal, a lower boardwalk was created to bring people closer to the water.

Today, the waterfront overlooks large open spaces for events at the promontory: the Float for national-scale events, the Esplanade Theatres by the Bay, the Art Science Museum, hotels, restaurants and the Marina Bay Sands Integrated resort.

Even within private developments, we have created public spaces to allow people to slow down and interact. We call them “city rooms” because they are like living rooms in the city. Asia Square was one of the first developments that set aside 25 per cent of its ground floor space for a city room which spans 9,000 square metres (or about 25 basketball courts). The ground floor space of these large-footprint developments has also remained porous and welcoming; people can walk through these buildings instead of around them.

What we build today will become the heritage of tomorrow. This is why it is important to ensure a high standard of good urban design and architecture and to humanise our city.

These are just a few examples of how urban design has made an impact and shaped our city. The resulting built environment is unique to Singapore and reflects our rich history and modern-day sensitivity and dynamism.

What we build today will become the heritage of tomorrow. This is why it is important to ensure a high standard of good urban design and architecture and to humanise our city.

Foreign friends have remarked that the skyline in Crazy Rich Asians appeared to be a work of CGI. Just take a walk around our city. Seeing is believing.

How much is your property worth?

GET MY FREE HOME VALUATION

...1 step away to get your FREE home valuation

WE'VE CROSSED 8,200 TEAMMATES ISLANDWIDE!!!Hands up in the air as we have crossed 8,200 Teammates in Singapore! 🙌🏻We've reached another milestone thanks to each and every one recruitment efforts. 💯💯💯#OneERA#ERAloves#AllNewERA #BetterInEveryWay #JoinUsAsRealtyWatchVIP #5StarBestRealEstateAgencyinSG #BestLuxuryRealEstateAgencyinSG ... See MoreSee Less

🏆 THE COMMODORE 🏆*l Be mesmerized by the Imm

ERA IS PROUD TO BE APPOINTED AS THE SOLE MARKETING

Are you a new RES or looking to explore real estat

Everything starts with a vision. Set a goal, plan

Shawn Kuah is a real estate agent and digital marketing expert and that builds digital brands by focusing on the digital identity, visibility, and credibility of organizations and individuals.

🏆 THE COMMODORE 🏆*l Be mesmerized by the Imm

ERA IS PROUD TO BE APPOINTED AS THE SOLE MARKETING

Are you a new RES or looking to explore real estat

Everything starts with a vision. Set a goal, plan